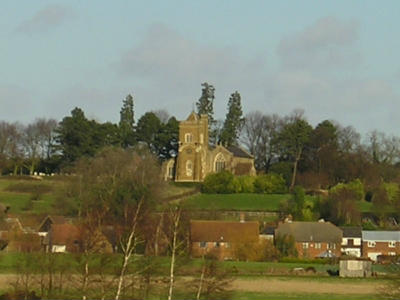 The Parish Church of St Mary the Virgin, Maulden stands on the Greensand Ridge to one side of the village main road, commanding imposing views over the village and surrounding Mid-Bedfordshire countryside. The village is referred to in the Domesday Book as Meldone and the meanings ascribed to the various versions of the name include 'cross on the hill', 'high down' and 'place of meeting'.

The Dunstable Chronicle states that the first building at Moldrich (Maulden) by the Dunstable monks took place in 1252 and the oldest surviving part of the north wall of the church may date back to this time. Part of the north wall and the bottom part of the tower date from the 14th century, the doorway is 15th century and the top part of the tower dates from the 16th century. The first rector of Maulden was D. Gerard de Ely, instituted 7th July 1269. Patron of the parish was the Abbess of the Convent of Elstow, in the Diocese of Lincoln, and the Archbishop of Canterbury (who at the time was Boniface). 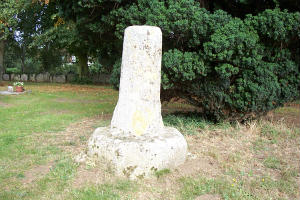 Just outside the south entrance to the church stand the base and part of the upright of an old churchyard cross. The origins of the cross are unknown, but the following is a possible explanation.

Maulden church is on rising ground to the north of the village and there are springs in Church Meadow. In this its situation bears remarkable similarity to the old pagan Saxon High Places, which were also to the north of the settlement and had water nearby. These High Places were used for preaching by early Christian missionaries. St. Aidan and his band were active from about 635, working in Northumberland and the old Kingdom of Mercia. As much of Bedfordshire was part of the kingdom they may well have come to Maulden.

Where the missionaries were successful in making many converts, crosses were erected. These were probably early Celtic crosses, with stepped bases and churches were often built there subsequently. This has led to speculation as to whether an early wooden church existed on the site before the first known brick and stone building was erected in the 13th century. Sadly there is, as yet, no proof of the existence of such a building.

The present churchyard cross, or its stump, is of later origin, dating as it does from the 13th century when the first known church was built. The cross may owe its existence to Bishop William Bley, Bishop of Worcester, under whose aegis Maulden was thought to have been at one time.

In 1229 the Bishop directed that a handsome cross be erected in every churchyard, to which a procession should be made every Palm Sunday. The cross was to be decorated with palms on this occasion and the uprights had holes in them to facilitate this. Not surprisingly these crosses became known as Palm Crosses. These churchyard crosses were usually placed near the South door of the church, as at Maulden. The Maulden churchyard cross, of which only a stump remains, would therefore have been erected between 1233 and 1260, when the first known church was built.

Due to bigotry at the time of the reformation, many churchyard crosses were destroyed in 1641 by order of Parliament. It is said that in many cases pious parishioners collected the fragments and buried them near the North wall of the church; some were even built into the chancel wall. Again, what happened to the fragments of the Maulden cross is not known, but it is nice to think that they may still be buried in the churchyard somewhere.

In 1824 the church consisted of the tower, a nave with a very low roof (it was reported in the Bedford Mercury of October 1858 that during a heavy downpour it was difficult to hear the sermon), a chancel with a slightly higher roof, a north aisle and gallery. This gallery was quite large and, because of the low roof, came down to only two feet above the tops of the pews underneath, as well as blocking the light from two of the windows. The pews, some of which faced different ways, provided seating for 248, plus 40 in the gallery. There was no south aisle and no vestry. There was a south entrance with a porch and a doorway in the north wall, next to the passageway to the Ailesbury mausoleum.

In 1858, the Rector, Charles Ward put forward the case to a special General Vestry Meeting for 'the enlargement and improvement of the church'. He gave a number of specific reasons: (i) the increased and increasing population, (ii) that the seatings were packed so tight that there was not room to kneel, (iii) that there was insufficient light from the four windows and the 'unseemly' skylight, (iv) that the gallery, which Ward described as 'a great evil', projected into the church, blocked the light from the windows and which so obscured the pews beneath it that hearing in them was difficult and (v) that the darkness so caused and the haphazard arrangement of pews 'encourages, or facilitates occasionally, unseemly behaviour' (sadly he is not specific about what would have amounted to 'unseemly behaviour' in 1858 - perhaps not kneeling!).

It was proposed that alterations should take place to remove the gallery, to extend the length of the nave and north aisle to fill the space up to the Brooks' Vault and to build a new south aisle. As this encroached upon the current chancel this would consequently require the chancel to be rebuilt. A vestry could then be added to the new chancel. At the same time the roof would be raised. Plans were approved and a contract for £2,163 agreed in less than two months. Work started in June 1858. The fundraising had started with a pledge of £100 from the Marquis of Ailesbury, the patron of the living, £500 pounds from Mr Foster-Mellier (a relation of the then Rector's wife) and the Duke of Bedford not only offered £1,000 towards the building works but was also willing to give a piece of ground necessary for the extension of the churchyard. A further donation was made by the Rector himself, matching the £1,000 pledged by the Duke of Bedford.

Some alterations to the specification had to be made as the rebuilding progressed and the work was finished in September 1859 with a total excess of £650 (shared between the Rector and the Duke of Bedford).

The improvements made to the church included the rebuilding of the original tower with the battlements being a foot higher than they were and now surmounted by a pyramid shaped, tiled roof. The nave roof itself was eight feet higher and a new south aisle was added, with a roof almost as high. The original nave and north aisle had been lengthened. The new walls were of sandstone and the window surrounds of bath stone. The chancel had new stained glass windows added, paid for by the Rector's family. Its floor was laid with Minton tiles while the remainder of the church was floored with a pattern of black red and buff tiles. A new font had been built, to replace the 12th century font which was placed in the now detached Ailesbury Mausoleum, until it was transferred to Lewsey, Luton in 1966.

(Much of the above reproduced by kind permission of David Bush) 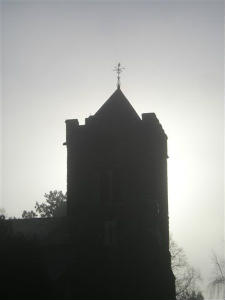