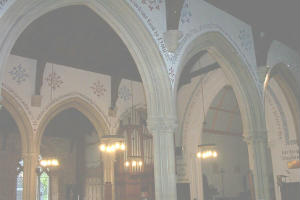 The internal decoration of St. Mary's Church is a very fine example of Sgraffito plasterwork.

As part of the internal decoration of the church after the 1859 alterations, the architect used a technique new to England to decorate the plasterwork. In an article published by Benjamin Ferrey in 1857, it was hoped that this would be an inexpensive method of making plaster an ornamental feature.

In this method, usually called Sgraffito, designs and passages of scripture were incised into the wet plaster, giving a decorative three dimensional effect. This was further emphasised by painting the designs and texts in colour, again working on wet lime plaster and using special pigments which actually became part of the plaster when the lime dried.

At the time this technique was used on all the walls, not just the ones which still have this feature today. The north and south walls and the Chancel walls were covered in Sgraffito designs.

In the second half of the twentieth century, dry rot was discovered in the roof. Plaster was removed from the Lady Chapel, the St. Alban chapel and the Sanctuary. The Chancel walls were subsequently replastered and painted white but the north and south walls were left unplastered, except for one square on the north wall which was left to show the type of Sgraffito design originally covering the whole wall.

There were those in the 19th and 20th centuries who felt that the architect had made excessive use of the new technique and that, as a result, the church looked too cluttered.

The restoration of the Sgraffito in 1997 has brought out the beauty of the designs and resulted in a balanced and beautiful feature of the church which enhances the effect of the white Chancel walls and roof. 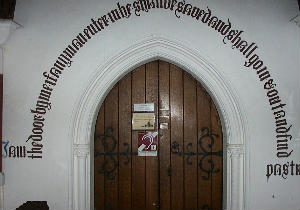 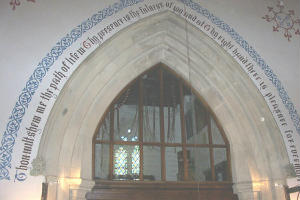 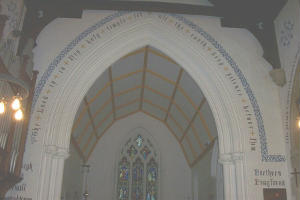 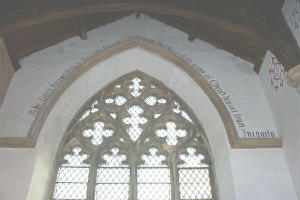