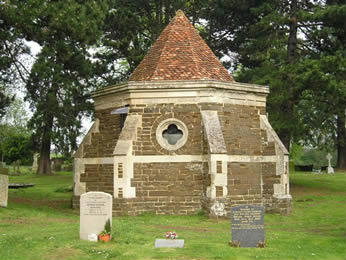 In the churchyard at St. Mary's stands an impressive 17th century octagonal mausoleum and crypt known as the Ailesbury Mausoleum.

The original Ailesbury Mausoleum was built in 1656 by Thomas, Earl of Elgin, in memory of his second wife Diana, daughter of the Earl of Stamford. However, the crypt had been used for burials prior to that date and may have been used as a meeting place for worship before the reformation.

Inside the building was a monument to Diana and busts of the Earl of Elgin and Edward Bruce, Diana's grandson.

Statuary in the Mausoleum. From left: Edward, Diana and Thomas 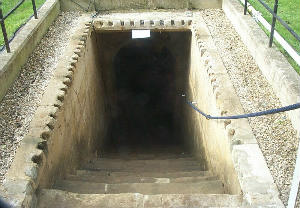 Steps down into the crypt

Steps down into the crypt lead from beneath a covering in the churchyard. Inside the crypt there are slabs sealing niches set into the walls containing the remains of many of the Bruce family. Some of these are inscribed; the earliest is dated 1652 and the most recent 1836. Two of the latest interred there were removed in 1837 to the present burial place of the Brudenell-Bruces in Wiltshire and the mausoleum and crypt have not been used for burial since.

The Mausoleum and Crypt today

Bedfordshire County Council took ownership of the Mausoleum and Crypt in 2001 and undertook a major conservation project, including the installation of replicas of the statuary. The Ailesbury Mausoleum is now managed by the County Council in partnership with Maulden Parochial Church Council and Maulden History Society. 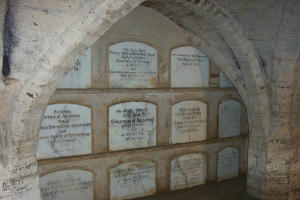 On certain Sundays, the mausoleum and crypt are open to visitors.